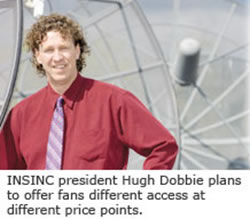 All Western Hockey League games will be broadcast on the Internet next season with help from a Burnaby technology company.

Interactive Netcasting Systems Inc. (INSINC) will offer approximately 720 WHL games on a pay-per-view basis. Individual games will be available live and on a delayed basis, for a cost of $5.95 apiece. Season packages will also be available.

WHL commissioner Ron Robison says the three-year deal, which expires at the end of the 2007-08 season won’t mean much revenue-wise, because the netcasts serve a niche audience.

But the league doesn’t face any major expenses either, other than ensuring all arenas have high-speed Internet access. “We’re very excited to have the opportunity to have our games on the Internet and make our games available to a broader audience and those who follow our games closely,” says Robison.

Traditionally, the WHL has had difficulty getting its games on TV. “We have an agreement with Rogers Sportsnet on national games (shown across Canada), but their focus really is on national events,” says Robison. “Where we’ve had a void is coverage of our local games.”

Shaw cable stations air more than 100 games, but all WHL contests will now be netcast.

By signing with the WHL, INSINC now has Internet-broadcast, or netcast, rights for two of Canada’s three major junior leagues.

It has also started negotiations with the Quebec Major Junior League and shows the games of one team, the Halifax Mooseheads – for free – under a deal with owner Bobby Smith, a former National Hockey League star.

INSINC, which also has an office in the Toronto area, fast-tracked OHL playoff pay-per-view netcasts after offering some regular-season games free, “because Canadians are starved for hockey” during the NHL lockout, says Dobbie. The company also wanted to survey customers on the quality of the netcasts and their viewing habits.

“We thought about (fast-tracking) for the WHL, but it was just a little too tight to get it in,” says Dobbie.

INSINC will supply computer decoders to all WHL arenas, while the league provides video and audio feeds from broadcasters and others who shoot the games and do play-by-play commentary.

INSINC avoids paying broadcast rights fees to TV networks, because the company is written into the WHL and OHL’s existing TV rights deals.

The key to INSINC’s success, Dobbie says, is its ability to store and retrieve footage through its proprietary database technology and an e-commerce system that processes and tracks purchases in real time.

Meanwhile, the WHL and OHL also have the option of distributing player stats and advertisements.

Viewers access the games through INSINC’s website and watch the action with standard Microsoft Media Player software, but Macintosh users will have to download equivalent software.

INSINC issues a disclaimer to customers that stresses the netcast may not be TV quality. “(Packages) will probably have different branding, but it’s basically like a gold, silver bronze or ABC format,” says Dobbie. “The lowest-level package will give any fan access to any game and the price point will be in the $250 range for the year.

“The next package up will include access to every single game, plus any archives. So if you missed the game and you want to go back and see it, you can go back and watch archived games as well and there will be a price point (in the $500 range) for that.”

The top-level package, known as the scout package, will provide all games, archives and clips attached to a searchable database.

“Which means, if you want to (type in) ‘Gilbert Brule goals’ it will find all (Vancouver Giant) games, every goal that he’s scored, list them all out – with the time and everything – and you can click and watch the goals,” says Dobbie.

WHL officials also intend to use the archives to review incidents that may require disciplinary action.

The service is described as the officiating package.

Robison says in future years the Memorial Cup, the national major junior championship, may be shown on the Internet pending an agreement with Sportsnet – but not this year.

Sporting events have been broadcast over the Internet in past seasons, but wider availability of high-speed access is eliminating technical glitches and making games more accessible and commercially viable for companies and leagues, including amateur circuits, says Dobbie.

As a result, INSINC has aired a variety of events, ranging from the Canadian Little League championships to European soccer to thoroughbred horseracing at such tracks as Hastings Racecourse in Vancouver, Fraser Downs in the Cloverdale area of Surrey, B.C., Stampede Park in Calgary, Georgian Downs in Barrie, Ont., and famed Churchill Downs, site of the Kentucky Derby.

Formed in 1998, INSINC evolved from Dobbie family-owned Dowco Computer Systems, which had supplied digitized drawings to architects and engineers since the early 1980s. INSINC began as an Internet radio network, which it still provides, and then found its niche showing sporting events about two years ago.

Having survived the dot-com “washout,” he expects the private company to generate $2.5 million in revenue this year and go public around the $5-million annual revenue mark.